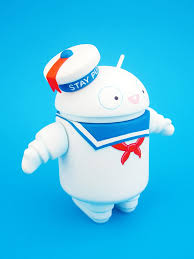 The new Android M version will be officially called Android 6.0 Marshmallow. To promote the new system there is a new mascot standing near the Google building in California.