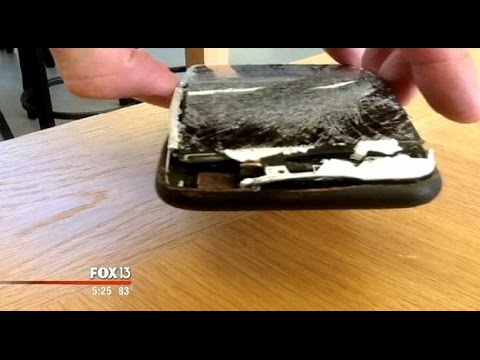 College classrom, middle of a lecture. Suddenly, speaking professor is being abruptly interrupted by a loud “pop!”, followed by one of the students jumping from his chair and reaching for his back pocket. Young man takes out something black, warped and smoldering, throws it on the floor and kicks away. The classroom is slowly filling with a black, acrid smoke… If you think that’sa good beginning for an action movie then thank you, I am glad. It is not a fictional writing by me, though, but a description of what happened not long ago in the American college in Burlington county. In short, an iPhone 6 Plus, kept by its ownder in his back pocket, exploded during class. This time, unlike in the cases of Samsung Galaxy Note 7, the phone was not connected to any kind of power source, a fact which may deepen the psychosis of people who already believe smartphones are a civilian version of a fragmentation grenade. Before going out and gettinng their anti-phone plate armour, though, it would be good if they learned that the phone’s ownder was sitting on it. Comfort of sitting aside, lithium batteries, like the one in that iPhone, do not like being pressed, and can react with an explosion after being so for a long amount of time.

So far, Apple has not commented on the case, which reminds us of the so called “bendgate”. Named so after the Watergate scandal, bendgate outrage begun when it turned out that iPhone 6 Plus was extremely prone to bending along the sides. Even though it was a very serious design flaw, Apple never commented on it. Right now it is difficult to say whether one problem had anything to do with the other. We can only hope that Apple will not ignore this “boomgate” issue and will officially adress it, and soon.

The victim of the pressed too far phone was hospitalized with, thankfully, only minor burns.