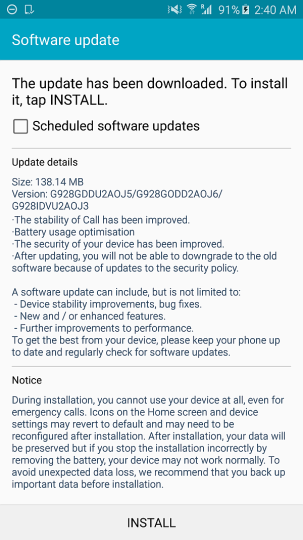 Not long ago, we received information, about the upcoming update for Samsung Galaxy Note 5 which was not long ago.
This time it is the other flagship that receives the update.
Galaxy S6 edge+ is great device that has many fans all over the world. It is no suprise that the South Korean giant is already making all of the corrections to the system, so that all users can enjoy it even more.

The update brings a different build number G928GDDU2AOJ5,call stability, battery optimizations, as well as improvements related to the security of the device.

You need to remeber however that the new system version will not allow you to downgrade the system to a previous version, which is a bit annoying for many users.

The new system version weights Weighing in at 138.14 MB, and has started rolling out already. The regions that have the update include Europe and India, and other regions should receive it soon as well.

If you need a network unlock for your Samsung model, our company sim-unlock.net can help you with that.
We offer special unlock codes, which remove the blockade, without any interference in the system as well, as no system changes.
It is an easy and simple way to make your phone free.