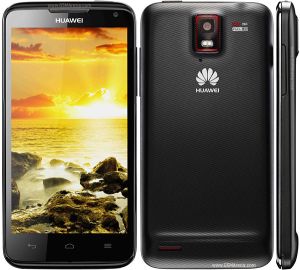 The Ascend D Quad is much thicker compared to other Android flagships, and the weight is above average, too.
Huawei Ascend D quad XL has a thumbs up for expandability, as it offers a regular SIM card slot, and a place for a memory card. It would have nailed a holy trinity if it had a removable battery, too, but the beefy 2,600 mAh battery is under a cover with four small screws that have to be taken out.
The 4.5” 720×1280 pixels display is very good, and worthy of the phone’s Android flagship status.

Read this few steps, how to unlock Your Huawei Ascend D quad:


Why unlock Huawei Ascend D quad and why choose sim-unlock.net ?
– we give 100% support in case of any problems while unlocking Your Huawei Ascend D quad
– opportunity to buy a foreign SIM card in another country to avoid roaming charges
– we are cheapest unlocking site over the internet
– after unlock You can take advantage of cheaper tariffs from locally competing networks while abroad
– we Guarantees fastest time and lowest prices
– we always inform You how to enter unlock code to Your Huawei