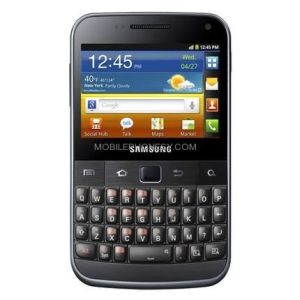 The Samsung Galaxy M Pro B7800 is a new Android smartphone with a full QWERTY keypad on the front. Our Samsung Galaxy M Pro review will overview the phone’s specs, features, and design. Although the device is not yet released, there is an expected release date sometime during the coming months (August 2011 or September 2011). Additionally, there are many other new Galaxy series smartphones being released by Samsung in the near future, such as the Samsung Galaxy W.
The Samsung Galaxy M Pro specifications and features are very similar to it’s counterparts and upcoming release partners (Galaxy W and Galaxy Y Pro). Some of the primary details include: 5.0 MP camera with LED flash, 1 Ghz CPU (400 Mhz less then Galaxy W), Android Gingerbread OS (v2.3), and 3G network connectivity. Unfortunately, this will be a somewhat mid-range handset and will not work on 4G.

Unlocked phones are mobile phones that can be used on any GSM network with all SIM cards. No matter which carrier makes the card, the phone will be able to recognize it and send voice and data over the network.
This is the best, safest way to unlock your phone.


Why unlock Samsung Galaxy M Pro B7800 with Sim-Unlock.net:

* waiting time for the code was reduced to a minimum by an automated system on our website
* we give 100% support in case of any problems while unlocking Your Samsung Galaxy M Pro B7800
* opportunity to buy a foreign SIM card in another country to avoid roaming charges
* Sim-Unlock.net Guarantees fastest time and lowest prices
* unlock your Samsung Galaxy M Pro B7800 without leaving home