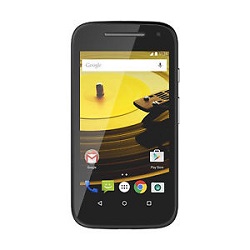 Unlocking New Motorola Moto E II gen LTE XT 1527 by code is the easiest and fastest way to make your device network free. It doesn't interfere in your system or change it in any way so even after using our code, you don't loose your warranty. In order to receive a network unlock code for your New Motorola Moto E II gen LTE XT 1527 you need to provide IMEI number (15 digits unique number). It can be found by dialing *#06# as a phone number, as well as by checking in the phone settings of your device.

Make your life easier and remove the network blockade from your Motorola Moto E II gen LTE XT 1527. Stop thinking, about huge bills and that you are stuck with the same operator all the time. Motorola network unlock is a simple and speedy service with a low price. It was created to remove the blockade from all Motorola phones that have an ANDROID system. The blockade is removed permanently and won't come back, even if you install the newest updates.

The delivery time for an unlock code for Motorola phones (the new base) starts from 1 to 4 working days.

The calculated average waiting time is 5 days 2 hours 2 minutes. (based on the last 50 orders)

1. Insert an unaccepted simcard to your Motorola Moto E II gen LTE XT 1527 (unaccepted means from a different carrier, not the one where you bought the device)
2. Message input unlock code should appear
**In special cases you might try a #073887* sequence to force your device to ask for an unlock code.
3. Enter unlock code provided by sim-unlock.net
4. Motorola Moto E II gen LTE XT 1527 is unlocked.

Sim-unlock.net has always given me tremendous service. I have used their services 6 times in five years and have always been satisfied. Their pricing is always competitive also.

Sim-unlock.net has unlocked many phones over the last 5 years for me. I have always had success and their pricing is usually lower than most.